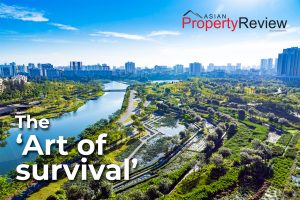 The ‘Art of Survival’

Bringing ecological balance or ‘peasantry wisdom’ back into the city is what will save the cities from natural disasters, asserts eminent landscape architect, Prof Yu.

Text by Jan Yong , Photos courtesy of Turenscape
Back in 2011, Prof Kongjian Yu, professor and the founding dean of the College of Architecture and Landscape at Peking University, has already articulated the return of cities to its natural surrounding or at least to a productive space where ornamental objects are replaced with edible plants and animals. It might seem counterintuitive to return to a bygone era but that’s how we could heal mother Earth in accordance with peasantry (subsistence farming) wisdom, reckons Yu.
A bold visionary who’s not afraid of going against convention, the professor who has a doctorate in Design from Harvard University, draws on ancient wisdom of the peasants as the basis for repairing our damaged land. It might seem a deceptively simple solution but the fact is the current conventional wisdom is so deeply rooted to the idea of more and more built megastructures as a sign of progress that it has somehow lost sight of the `wood’.
[ihc-hide-content ihc_mb_type=”show” ihc_mb_who=”1,2,3,4,5,9″ ihc_mb_template=”1″]
It has pursued artificial beauty as in architecturally impressive buildings that it has forgotten that it’s the wood that provides long-lasting sustenance to the trees.
In other words, the beautifully built infrastructure and buildings have slowly but surely destroyed the natural ecosystem around them which is key to their continued survival. The art of survival of the land is lost in pursuit of the modern city.
Not surprisingly, nature has a way of reminding humans of its wrath — what we call natural disasters are in part caused by our own naive disregard of the need to protect our natural environment as much as possible. The ecosystem is what gives balance to our world so that it does not go out of whack.
Examples when nature revolts in the face of human encroachment are the increasingly frequent ‘natural disasters’ such as floods, droughts, and forest fires.
In his papers, notably “Green Infrastructure through the Revival of Ancient Wisdom” which is published by the American Academy of Arts and Sciences, Yu gave a compelling argument that current developments are antithesis to what’s good for the world and ultimately, us. (see his collection of quotes compiled by us).
Yu, who’s also the founder and design principal of Turenscape, asserts that climate change is real. “And it is exacerbating problems like floods, droughts, air and water pollution, and loss of habitat and biodiversity.”

“The grey infrastructures which are made of steel and concrete, which we built to tackle the problems lack resilience nor are they sustainable. The alternative is

Living with nature is inexpensive and easy, comfortable and beautiful, and an art of survival.

Nature-based green infrastructure. The shift from grey to green is challenging traditional design practices technically, aesthetically and ethically. It is already demanding innovative green technologies that are replicable and can be inexpensively implemented at the massive scale needed to halt these truly global threats. Landscape architecture, therefore is an art of survival that creates deep forms.”

The new garden city is a mark not of Utopia but of ecological civilization.

Further, the award-winning architect notes that it is widely recognised that the conventional economic oriented approach to urban development planning has failed.
“For many years, the major driving force of urban development has been road infrastructure and the developed urban area. With recurrent city floods and the ensuing heavy damages, the importance of “sponge city” concepts and relevant planning methodologies has been widely recognized.”
On his part, he views the concept of “sponge city” as something that integrates solutions to urban inundation in many cities. These solutions include stormwater management, flood resilient planning and design, water quality improvement, aquifer recharge, brownfield restoration, habitat restoration, greenspace creation, and urban microclimate regulation. In practical terms, a sponge city would have rooftop gardens, permeable pavements, wetland parks and underground storage tanks, amongst others.
In an exclusive interview with Asian Property Review, Prof Kongjian Yu shares his thoughts on Sponge City and his version of a new ‘ecological civilization’.
1.How did you come up with the idea of Sponge City?
Yu: My childhood experience in the village Dong Yu in China’s Zhejiang province, as a farmer; my advanced study and research of ecology; and the visible failure of the modern grey infrastructure.
2.What other similar concepts are there?
Yu: Nature-based solution, low-impact development, water-sensitive design, sustainable water resource management, etc.
3.Do you think Sponge Cities would work well in the Philippines and Malaysia which have seen huge devastation from the recent floods?
Yu: Of course, any part of the world is doable, particularly in the monsoon climate. Dry or wet, sponge city is a water-resilient city. Most of the cities in the world, particularly in the monsoon vulnerable areas, suffer from floods and droughts, because of the uneven water distribution around the seasons. Those cities which have mild climate, such as European cities, do not suffer from the same problem. That is why the wisdom and knowledge obtained from the monsoon and the changing climate experience, can help the formerly climate-mild cities to solve their flood and drought problems, and even beyond that (habitat recovery, remediation of water quality, and beautification).
4.How many Sponge Cities are in the pipeline in China?
Yu: Every city in China is directed towards a sponge city.
5.What are the raw materials and manpower requirements to build and maintain an average-sized Sponge City?
Yu: Natural materials, dirt, plants, and manpower needed to execute ponding, terracing, diking and ponding, and islanding.
6.With climate change accelerating, are there other concepts that you are working on to deal with the other devastating effects of climate change such as forest fires?
Yu: Landscape security pattern: The negative planning meaning nature first or landscape leading the way, and be adaptive to nature especially water; planning and building ecological infrastructure (EI); adaptive architecture, such as raised building, higher threshold, flat and escapable roof tops. In addition, we work on productive landscape, low carbon aesthetics, ‘big foot aesthetics’ and ‘big foot revolution’. The latter refers to natural-based deep form in the design of manicured little ‘foot aesthetics’. The result is a new vernacular (local and functional) which is low maintenance but high performance on a daily basis. This is also my design philosophy and how I would design a new modern city from the ground up.
Transportation tools will be high-speed railway trains, connecting compact pedestrian communities, where people can pick up public bicycles. Outmoded car parking lots can be used to grow wheat and vegetables, or become fish ponds that collect rainwater. The new garden city is a mark not of Utopia but of ecological civilization. It is an art of survival.

7.In your essay, “The Big Foot Revolution: you mentioned how ornamental gardens are about as useful as binding a woman’s feet. These ornamental approaches were created by an urban elite that saw sophistication in a lack of functionality, in rebelling against nature’s “inherent goals of health, survival, and productivity: Instead, you recommended a new landscape aesthetic based on incorporating the rural, the messy, the functional landscape into the urban realm. “In our resource-depleted and ecologically damaged and threatened era, the built environment must and will adapt a new aesthetic grounded in the appreciation of the beauty of productive, ecologically-supporting, survival-enhancing things:’ Back then, this was considered revolutionary landscape architecture. How much nearer are we towards this ideal goal of yours?
Yu: Long way to go, but sponge city campaign in China is leading us much closer toward this ideal. The Turenscape has built over 600 projects in more than 250 cities that bring people closer to this ideal city.
8.Which are your favourite projects to date?

9.   If you are not at work, how do you spend your time?
Yu: Jogging in nature along a river to appreciate the natural formations carved by the force of water; walking across the farm fields to enjoy the delicate design of farmers based on natural ecosystem; and walking in the village to feel the everyday life of the villagers.
10.Your view on land reclamation and its impact on climate change.
Yu: Land Reclamation of the wetlands, lakes, riparian floodplains, as well as oceans, is certainly climate negative in terms of both mitigation and adaptation. Firstly, it dramatically reduces the flood regulation capacity in the urbanized area. A proven example is Wuhan City in China, where there used to be scattered thousands of wetlands and lakes. About one third of them have been reclaimed for urban development in the past decades, thus causing severe annual urban floods. Another example is Hainan Island where coastal shoreline erosion and ocean currents have been observed. This is close to where man-made isles were made for real estate developments offshore.

As a result of the negative impact, the Chinese government has decided to remove some of these built landfills and tear down the buildings on them. Based on my research at Peking University, about 70% of the built urban areas in China in the last five decades have been reclaimed riparian floodplains and wetlands, which is the one of the major causes of the urban inundation and floods.

Today’s Chinese cities and architectures are unsustainable: Our monumental architecture, wide roads, endless parking lots, huge city squares, flowered landscapes, and engineering-oriented municipal networks will be eventually be seen as ghastly mistakes.
Future cities will be “new garden cities,” emitting low or no net carbon, productive and conservation-minded. Rainwater will not be discharged from municipal pipes, but will be retained in local ponds and supplement groundwater.
Green spaces will be full of crops and fruit trees, instead of ornamental flowers and fruitless trees. Rice and broomcorn will ripen in the fields of communities and schools.
In the harvest season, animals and humans will harvest and celebrate together. Architectural surfaces will support photosynthesis. The roofs will be fish raising ponds, with the functions of heat preservation, energy saving, and food production. Cellars will be great mushroom factories.
CCTV Tower will become a complex system combined with agriculture, animal husbandry, and fishery. In the hole of the “underpants,” several wind turbines will generate electricity.
The National Opera House, easily transformable into a greenhouse, will grow various fruits; its basement will grow mushrooms. The Bird’s Nest can become national vegetable market. Its great steel framework can be used to hang vessels holding a kale yard in the air.
Tiananmen Square can be converted into sunflower field. While producing oil, it will offer citizens the chance to enjoy the daily movement of the bright flower heads tracking the sun.”