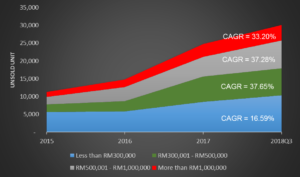 Dr Foo Chee Hung reveals some flaws in the solutions proposed for affordable housing in Malaysia.

Malaysia is experiencing a housing affordability crisis. This is indicated by the spiking number of unsold units in residential housing – which is widely attributed to the direct consequence of mismatch in terms of price, product, and location – due to the skewed-market that is in favour of building over-priced houses.

Several attempts have been put forward to solve the housing affordability crisis, among them are:

(i) increasing the supply of affordable housing; and

While building more affordable housing seems to be an alternative to increasing home ownership among the low-and middleincome groups; in reality, increasing supply is not the answer to the problem.

One may find that the demand for affordable housing is high, and yet there are still a lot of unsold units within the affordable price range products since 2015. Figure 1 indicates that the main deterrent to home ownership is neither due to a simple feature of supply and demand, nor the expensive house prices.

On the second point, policy makers generally believe that the use of industrialized building system (IBS) not only can help in increasing the supply of houses, but also in reducing house prices; due mainly to the perception that construction cost is a major barrier towards wide-scale provision of affordable housing. They think that if they reduce the construction cost, properties can be built at a lower cost, thereby leading to a lower selling price.

However, the jury is still out as to whether IBS can really reduce the cost of construction, because a common understanding among stakeholders is that the use of IBS will result in an additional 10% of construction cost due to its high capital investment on skilled labour, heavy equipment and mechanized construction facilities.

In this sense, policy makers should avoid falling into the following pitfalls in order to complete the picture in solving housing affordability crisis:

Housing affordability is often misunderstood as a lack of affordable housing in the market; and hence, policy makers tend to treat affordable housing as “a discrete category of housing that aims to help those who are deserving of aid”. However, housing affordability does not necessarily mean the house or the project itself. It actually refers to the fact that “one is spending less than 30 percent of his/ her post-tax income on housing”. According to international standards, families paying more than 30 percent of their income for housing are considered cost burdened and may have difficulty affording necessities such as food, clothing, transportation, and medical care.

In this sense, policy makers should view the country’s housing problem as “housing is not affordable for the general public”, where the main driver of the problem is the badly impaired purchasing power of the people. Housing affordability crisis is likely to happen when household income is not increasing as quickly as the overall cost of living, which has greatly reduced the discretionary income and along with it, the people’s ability to afford a house.

For example, in 2016, households with incomes below RM2,000 spent 94.8% of their incomes in consumption items, as compared to 91% of their income in 2014. The median household income in 2016 was RM5,228, out of this about 67% is spent on household expenditure, up from 65.1% in 2014. This means that the income remaining after expenditure, that is the residual household income, has reduced for all income classes. This is evident in the last 5 years where developers have expanded their offering of houses priced between RM300,000 to RM500,000, with the belief that people with a monthly income of RM5,000 to RM7,000, and with the help of banks, can easily afford these houses. Unfortunately, supply quickly outgrew demand as people are tightening their purse strings due to steep monthly expenses, coupled with their low confidence on the current housing market and the economy. More so, these potential buyers are facing high loan rejection rates as banks tend to favour those with higher discretionary income seeking home loans of RM1 million or more.

The use of advanced construction technology (i.e. IBS) is said to be able to lower down the construction cost, thereby contributing to a larger saving that can be passed on to the house buyers. However, one should bear in mind that building cost is not the only cost element within the scope of housing development, though it is a major component. Other costs are involved as well such as cost to acquire land, cost to provide infrastructural services, development charges and contributions, etc.

In fact, housing development costs consist of construction cost, land cost, soft cost (referred to as professional fees), compliance cost, and financial charges. Common distribution of these costs are 50%, 20%, 10%, 8%, and 2% of the total development cost, respectively.

In terms of construction costs, it is further divided into building cost (70%), infrastructure cost (20%), and preliminaries & contingencies (10%). Building cost alone can be further sub-divided into superstructure (50%), substructure (15%), architecture & finishes (20%), and M&E services (15%) (Figure 2).

IBS mainly affects the cost of structural and wall element of a building. If structures and walls (superstructure) make up only half of the total building cost, while building cost contributes to 70% of the total construction cost, which is about half of the selling price; then, an IBS method of construction only has impact on 17.5% of the selling price of a house. In this case, if the adoption of IBS is said to reduce 10% of the cost of structure and walls, the equivalent saving is about 1.75% of the selling price, which is rather not impactful as an alternative to reducing the cost barrier to affordable housing.

This suggests that IBS construction has less influence in determining house prices. Whilst better construction technology should be pursued, focus must be given on alternatives that can really help in reducing house prices, such as unlocking government land for affordable housing development, relooking the planning requirements, and reviewing the development charges and compliance costs.

Pitfall #3 – Wrong Perception on the Causes of Overhang

Overhangs is often said as the direct outcome of the skewed-market which is in favour of building over-priced houses; yet in reality, the issue runs deeper than it looks. It is not simply the end result of building mismatched products by profit-seeking developers, but a reflection of the structural problem in the country’s affordable housing supply-delivery system.

However, there is a minimum cost of building a house. If house prices could be lowered down to meet the demand, at the right quality and location, it would have happened. In reality, it is unlikely to see houses priced below RM300K which come with good facilities, at a minimum of 900 sq ft, in good locations with connectivity, parks, and shops. There is a need for cross-subsidization when building affordable housing below RM300K; and by what is in effect, a tax on the free-market houses. In this case, the commercially rational response by developers is to build high-end houses since the development must support an equal number of subsidized housing regardless of the free-market units’ selling price. Consequently, one can see that high-end houses dominate the free-market housing market segment.

Figure 3 illustrates the common scenario faced by developers when they are mandated to build certain amount of affordable houses with capped selling prices. Instead of building 480 units of free-market houses, the developers are only able to build 384 units and are required to build 96 units affordable houses. In this case, the loss in development value is RM31.7 million. This is the opportunity cost when developers cannot maximize the value of the land. The loss will not be borne by the developers but will be passed on to the end-users through increasing the selling prices of the free-market products.

Figure 3: Simulation on housing development, with and without affordable housing unit

Whether the free-market products are sold at RM408k or RM1million, they must support an equal number of subsidized housing, which is 20% of the total units built, in this case. As such, the tax incurred on each of the 384 units free-market products is RM82,677 which is just 8.3% of the selling price of a RM1 million luxury house; but for a RM408k house, the tax rate is 20.3% (Figure 4). As a result, there is a tendency of launching highend market segment housing among developers.

The policy of subsidizing affordable housing for the lower income group may be defended on the grounds of social justice, but the effect of the implicit tax on the free-market houses is inequitable. This not only causes a skewed-market in the housing industry, but also leads to the critical structural problem of overhang in the housing market.

The role of government in shaping the housing industry is especially pertinent. However, sometimes, the regulations imposed by the government are perceived as imbalanced and serve only to increase the challenges faced by developers to maintain their survival.

It is suggested that the government should seriously contemplate creating a supportive environment to enhance the competitive advantage of private developers, while ensuring all-round benefits for the government, housing developers, and house buyers.