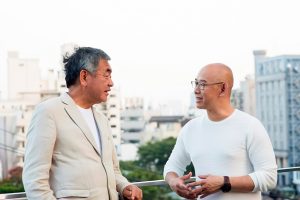 Leading Australian property developer Crown Group has engaged one of the world’s most renowned architects -Kengo Kuma, to design his first-ever residential project in Brisbane comprising a $500 million (RM2.02 bil) development at West End alongside award-winning Australian firm, Plus Architecture.
Kengo Kuma & Associates has started work on the new design for the remarkable apartment development planned for the burgeoning suburb, which will offer luxury riverside living only minutes from the city. The collaboration is yet another aspirational push for Brisbane which is fast becoming an architecturally rich city, with billions of dollars worth of recent projects elevating the local experience and aesthetics.
[rml_read_more]
Kengo Kuma is a highly acclaimed Japanese architect, known for creating some of the world’s most extraordinary public buildings and homes. With offices in Tokyo and Paris, he is famous for his use of cedar and often melds the use of timber and the natural environment with contemporary urban structures.
Some of Kengo’s most notable works include the Suntory Museum of Art in Tokyo, Bamboo Wall House in China, LVMH (Louis Vuitton Moet Hennessy) Group’s Japan headquarters and Tokyo’s Olympic Stadium for the 2020 Games.
Crown Group is an international developer headquartered in Sydney which is renowned for
developing premium apartment projects that have set new design benchmarks. It has become globally recognised most recently for its iconic developments Arc by Crown Group in the heart of Sydney and Infinity by Crown Group at Green Square – both of which have won multiple international design and construction awards.
Chairman and Group CEO Iwan Sunito says he is honoured that Kengo had agreed to work on a project with Crown Group again.
“We were fortunate enough to secure Kuma as one of the designers of Mastery by Crown Group at Waterloo in Sydney, which became his first-ever residential project design in Australia,” says Sunito.
“Now our buyers will enjoy the opportunity to live in Brisbane’s only Kengo Kuma-designed homes. The West End development has the potential to become the largest residential development that he has designed to date, in terms of its expansive floor area.” The West End development will be Crown Group’s first project in Queensland. It will offer beautifully designed luxury apartments set on 1.25ha of prime waterfront land at 117 Victoria Street.
There will be a mix of apartments, terrace houses and penthouses, with many taking advantage of the river and city skyline views. It will offer Crown Group’s signature resort-style facilities including a pool, barbecue and poolside facilities, gym, community room and lush tropical gardens.
Kuma says that he was looking forward to creating West End’s first urban resort with open spaces that would bring the riverfront alive.
“Brisbane to me is a very beautiful city with rich culture and natural heritage,” shares Kengo.
“In general, I think there is a strong connection between people and nature in Australia. The rich natural environment there is special. Furthermore, people’s lifestyle and culture have evolved around embracing and integrating nature into their everyday lives.
“I think Australians are looking for a hardware (architecture) that fits this kind of lifestyle, more so than people living in other countries so the design will seek to embrace that.”
Kengo adds that he also wants to make a strong physical,
cultural and emotional connection between the Brisbane
river and the residences.
“A large open space component will provide a place where people can connect with one another while enjoying the views, sounds and atmosphere of this beautiful river,” adds Kengo.
Danny Juric, Director of Plus Architecture Brisbane says that the Kuma project represents a new era in architecture, in which globally awarded and culturally rich design would become accessible to everyday consumers.
“Kengo’s iconic style will be a great addition to West End and we will work closely with him to ensure the localisation of the design is exceptional,” says Juric.
“It’s a very special collaboration for us, one which will enhance the cultural fibre of the city and create a valuable and rare piece of local history.”
Trent McLauchlan , Director of Queensland Development says he expects to have a design concept by early next year besides lodging revised designs with Brisbane City Council in mid-2021.
“This design is going to set a new benchmark for residential living in the locality,” concludes McLauchland.
“It will become the most sought-after development Brisbane has seen in decades.”