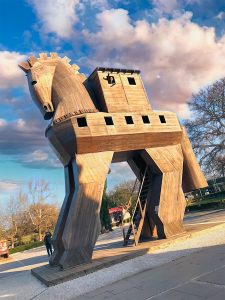 In all my travels, I’ve always been drawn to places that are there and yet not there. Sorry, what do I mean by that? Let me explain.
Ever since I was a young lad, which frankly was a very long time ago, historical battles and their battlefields have fascinated me. Especially the ones in Europe, otherwise known as the old continent, where epic battles were fought. And so, as the years rolled on and I reluctantly became an adult, I made it a feature of my holiday travels to visit at least one famous historical site in which an epic battle had taken place.
The problem with this idea is that those sites or locations very often had no longer any evidence of a major battle. For example, if you visit the D-Day landing beaches of Normandy, most of them are just desolate, wind-swept beaches with no hint of the largest seaborne invasion in history that occurred during the tail end of World War 2 (WW2). Another example is the battle of Waterloo in Belgium where Napoleon’s army and France’s domination of Europe ended in 1815. The site of that epic battle is now just a wide, empty grassy mound that faces a few taverns where the locals would rather chat about how great Belgium beer is rather than how great the battle was.
So, here I was with my better half and trusty travel companion, travelling in Turkey, once known as Anatolia and the centre of the vast and powerful Ottoman Empire. It was the early part of Spring in which there was plenty of frost and temperatures were at the low singles with biting, frigid winds.

Our journey into this beautiful, fascinating and exotic land that straddles two continents had already taken us from Istanbul at the European end to Ankara situated on the Asian side. From there, we moved on to Cappadocia, veered west to Pamukkale before passing through the ancient ruins of Ephesus and to the coastline of the Aegean Sea. Then, the journey headed north to Kusadasi, Izmir and eventually Canakkale and here is where I started thinking about the ancient city of Troy. The one found in Greek mythology and depicted in Homer’s Illiad and many ancient antiquities. So, before we hit Canakkale, our transport took a detour to the site of what was once the most fabled of all ancient cities, Troy, or was it?
The existence of Troy and by extension, the Trojan War, has long been debated by historians who are still divided to this day over its factual authenticity. As we know, Homer, the Greek philosopher and poet, wrote the very first work of Western literature titled “The Illiad” around 800 B.C. Briefly, it tells how Helen, the beautiful queen of Sparta and wife of its Greek king Menelaus, was abducted by Paris, the prince of Troy. The furious Greeks then sent hundreds of ships and a huge army to besiege the coastal walled city of Troy but were instead stuck in a 10-year stalemate. But the city eventually was conquered when the Greeks pretended to sail away but not before leaving a giant wooden horse behind. The Trojans celebrated their victory as they brought the horse into their fortified city but once inside, the hidden Greek soldiers sprang out and eventually destroyed all of Troy. And yes, they took a reluctant Helen back too.
However, what you see with your eyes in present day Troy is just the remains of a modest sized walled city that is still being excavated and there is no trace of any epic size battle. It also lies quite a distance from the coast so it takes quite a bit to imagine thousands of Greek ships moored nearby 3,000 years ago. The evidence doesn’t quite convince the visitor that Troy was indeed located here, to be honest, but is its authenticity really that important? It is still a charming location, very laid back with plenty of interesting souvenir shops and a giant replica of the Trojan horse in which you can climb into and pretend that you were a Greek soldier hiding in the belly of the horse. Very instagrammable! So again, I find myself being in a historically important battleground with no sense that it ever did happen. That was what I meant at the start with what I said about being there and yet not there. I wouldn’t say it was a needless journey but if you have time, lots of imagination and an appreciation for Greek mythology, you can enjoy Troy. Like the historical cities that have been immortalised through the ages, Troy is only as real as your mind can imagine.