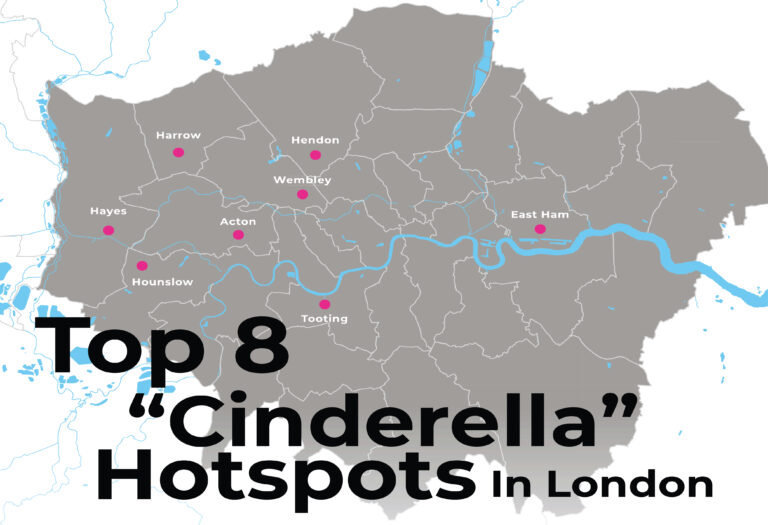 It’s certainly true that house prices in many parts of London are eye-wa teringly high – but the la test research from Barratt London and Rightmove also reveals a wide range of underappreciated hotspots that offer great potential for first-time buyers and residential investors alike.

These ‘Cinderella’ areas – as in the fairy tale, with a fantastic transformation set for them ahead – are mainly made up of active regeneration areas that haven’t yet seen huge gains compared to their glitzier gentrified neighbours whose house prices have already reached their peak.

However, these Cinderella areas are predicted to be the real winners of 2022 and beyond. Locations identified in the research focus on Greater London, including Hayes, Hendon, East Ham, Catford, Tooting, Hounslow and Acton, all of which not only offer a lower initial purchase price but also the likelihood of substantial capital gains.

Stuart Leslie, International Sales and Marketing Director at Barratt London, says: “London suburbs are flourishing, with people willing to move further away from the city centre in search of more space and improved quality of life. With regeneration happening in areas such as Acton,

Wembley, Harrow, Mill Hill and East Ham, we expect prices to rise in the outer zones over the next decade.”

Leslie continues: “Positive forecasts from many estate agents would suggest buyers will continue to see positive capital gains in the long term. Whilst the wider UK market has seen massive house price inflation of well over I 0% in the last year, the capital saw the lowest regional price growth over the past 12 months , leaving a huge opportunity for buyers in Asia to take early advantage of expected house price growth.”

JLL similarly predicts that in 2022 the Greater London area will see growth outweigh that of the rest of the UK -6% as opposed to 4.5% – and that this trend will continue for the next four years, leading to an anticipated increase in London house prices of 25.8% compared with 21.7% elsewhere in the country.

James Puddle, Founder and CEO of One Global Group, one of Barratt London’s selling agents, says: “London has lagged behind in the property boom of 2021, as buyers and renters looked out of the capital and city centres. However, we have already seen the trend reversing and more people coming back to the capital.We expect London to be one of the top performers in 2022.”

House prices in the UK capital also offer a great opportunity for Asian investors where cooling measures have made some local property investments more difficult.

“Buying in London doesn’t need to break the bank, there are a number of locations primed for growth. With the delivery of key infrastructure in the coming years – such as Crossrail – many areas are becoming more accessible and desirable to live,” adds Puddle.

Leslie notes: “In the early stages of the pandemic, the city exodus tested London’s economic resilience. But the desire for fashionable urban living is certainly nowhere near abating, and crucially, presents fantastic opportunities for savvy buyers.”

1.Acton
Despite being extraordinarily well-connected with no less than seven tube stations, the average house price in Acton remains considerably more affordable than its neighbours: 9.2% cheaper than Ealing and 36% cheaper than Hammersmith. Prices have fallen by 3% since 2016 . However, all that is set to change, with capital growth now predicted to be around 21 % in the next five years, along with growth in rental yields of up to 15% in the same period [Source: CBRE]. This is mainly due to Crossrail opening, meaning services from Acton Main Line station will give even faster journey times of nine minutes to Bond Street and 23 minutes to Canary Wharf. As an active regeneration area, developers are piling in.

2.East Ham
The average home in East Ham is over 49% cheaper than the overall London average at just £408,451 (compared to £675,263), according to Rightmove. It is one of the most affordable locations in Newham yet sitting in the top four boroughs for the highest volume of new build homes currently underway.

Leslie commented: “Starting prices are currently below the London average and very affordable, with local investment driven by one of the biggest regeneration masterplans in London. Buyers are clocking on to this hotspot; now is the time to buy here to see the most capital gains. The vibrant community of East Ham has lots of personality too – it’s a Zone 3 location that is going up in value fast.”

East Ham has experienced positive yearly house price growth of 2% compared to its overplayed neighbours like Hackney, which actually saw a reduction in values by -3%.

3.Harrow
One of the most affordable places in this leafy North London borough is Harrow itself, where prices are rising yearly but only modestly at 3% compared to its more expensive neighbours like Stanmore (9%) and Finchley (4%), as gentrification sets in.

Early bird buyers have the best opportunity to buy affordably here and experience the benefit of capital growth as thousands of new homes, gyms, cafes, restaurants and a supermarket are all being delivered in this £ 1. 7 5 billion regeneration hotspot.

Situated in Zone 5, but with Zone 2 travel times, Harrow is already an amazing place to live, with lots of green space and 98% of its schools judged as either Good or Outstanding by Ofsted.

4.Tooting
Tooting, in Wandsworth, has shown increases of just 2%over the past five years despite being on Lonely Planet’s list of the world’s 10 Coolest Neighbourhoods. But its Cinderella days may soon be over.

Tooting is also nearby to desirable neighbourhoods Earlsfield and Wandsworth; according to Rightmove, the average price for an apartment in Tooting stood at £480,271 compared to £548,911 in Wandsworth and £517,020 in Earlsfield in 2022, making the desirable southwest London lifestyle a more attainable goal.

Leslie says: ‘Tooting is getting 32 acres of new public parkland – the first of its kind since the 2012 London Olympics. The desirability of southwest London has been incredible to watch over the past decade, and Tooting is becoming one of London’s most exciting and vibrant neighbourhoods with markets, independent shops, restaurants and bars popping up all the time. New developments here are still in their infancy, making way for a wave of new residents and amenities for the growing local communities. It’s definitely one to watch over the next couple of years.”

5.Hounslow
“This is a true Cinderella location, often overshadowed by leafier neighbouring areas that feel more gentrified like Chiswick and Turnham Green. But buying in Hounslow means affordable price points and the biggest opportunity for capital growth thanks to a mass of new developments in the pipeline,” says Leslie. “It is changing rapidly -certainly one of London’s most exciting growth areas.”

6.Hayes
“Hayes is a rarity”, according to Leslie. “It’s on the Crossrail route but with an average property price below the £400k marker, it offers a meaningful alternative to overpriced neighbours like Northwood and Ickenham. The investment committed to regenerating Hayes is remarkable, having seen the most growth in the past decade compared to all of its Hillingdon neighbours.”

Leslie continues: “There isn’t anything like Hayes Village for sale a tthe moment, with the structural proportions of the Edwardian era combined with the pristine finish of a new build.”

7.Wembley
“The transformation of Wembley started in 2002, and is not due to complete for five years, so there is still a long way to go until we see Wembley’s regeneration hotspot fully come to life. Residents should still see sizeable capital growth on their purchase as the area’s monumental urban regeneration project reaches its pinnacle,” says Leslie. Wembley Stadium continues to host major global events from sports to music and is one of the UK’s biggest shopping destinations.

8.Hendon
“We’ve had first time buyers here who bought early and have been able to become second steppers in just a few years due to the rapid house price growth of the area. Our site at Hendon Waterside shows the real transformation here. Starting in 2012, the average property price in the scheme was £222,943, and by 2019, that grew to £468,709, meaning 110% appreciation in capital values. The surrounding boroughs of Brent and Barnet saw increases of 50% and 44.5%, showing clear advantages to investing directly in regeneration areas,” says Leslie. APR