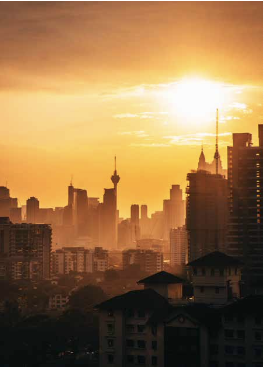 COVID-19 had a heavy impact on the real estate market and economic growth. However, looking back, it might have been worse.
Real estate developers responded by holding back on new property launches, especially at the high end spectrum of the market. According to the Real Estate & Housing Developers’ Association (REHDA) Malaysia, in the second half of 2020, some 12,640 new residential units were launched as compared to 12,556 in the same period in 2019.
These numbers indicate that, at a time when one would otherwise have expected an increase of 10% or more in newly launched units, the number of launches was instead nearly flat, climbing just by 0.7%.
Because of Covid-19, the share of transactions going to overseas buyers decreased while the shares going to first-time homebuyers, upgraders and investors increased. Developers responded by slowing the delivery of higher-priced properties that were in the pipeline. Sometimes, that meant lost jobs for contractos building these projects but this decision helped keep developers in the black so they could continue to provide new housing for the country.
[rml_read_more]

Overall, the market in 2020 was lackluster. However, I think many share my conviction that it performed much better than what most observers fearfully speculated one year ago. That is when the scale and seriousness of the pandemic first became fully apparent.
The first half of 2020 was the worst hit because of the pandemic and the neccessary efforts taken to control its spread. Both the real estate market and the economy however. responded positively in the second half of
the year, as the country opened up somewhat with the government providing stimulus.
This timeline is reflected in the data in which, in the first half of the year, according to the National Property Information Centre (NAPIC), recorded transactions decreased by 28% as compared to the same part of 2019 in which the total transaction value decreased by 32%.
Economists at Capital Economics expect Malaysia‘s Gross Domestic Product (GDP) to grow by 7% this year. That would normally be considered very good in terms of performance but this looks less exceptional when you realise that the results is coming off 2020, which was a poor year for growth, to put it mildly.

All is not negative though as there have been some bright spots in the industry. Residential sales at Juwai IQI for instance, actually increased in 2020 and are rising again this year. The developers that Juwai IQI collaborates with were quick to respond to changing buyer preferences.
The government’s Home Ownership Campaign (HOC) incidentally, has also been a support to Malaysians who were uncertain about getting into the market. According to reported data, the Campaign has been responsible for the purchase of 34,354 residential units since June of 2020. Incidentally, these homes in total are worth more than RM25.65 billion.
Juwai IQI hopes that the government will extend the HOC to the end of the year. This is because the economy could use that extra support in 2021, as could Malaysia’s young population incuding young families.
In the retail sector, operators such as Sunway Putra Malls is already showing signs of recovery. This March, foot traffic was back to 90% of the “pre-pandemic Normal”. Sales meanwhile was at 95% of 2019‘s levels. While we are not there yet, many observers expect a post Covid-19 boom in retail spending due to pent-up demand which some are labelling as “revenge spending.”
In the first three months of the pandemic in Malaysia, the property industry moved at warp speed through at least a decade of innovation and digitalisation.
Indeed, today, both buyers and renters can utilise new tools that allow them to complete transactions swiftly, easily and with even more transparency than ever before.

The best way to think of 2021 is to view it as a transition year. It is the bridge year forming from the depth of the crisis in 2020 and reaching to new heights of the coming economic boom. In fact, some analysts believe that the boom could begin in earnest in 2022.
This year and even more so in 2022 and beyond, low interest rates, government incentives and higher employment and economic activity will all work in the favour of buyers in the residential market.
In the years to come, Juwai IQI believes that this new reality will increase the share of Malaysians who are able to benefit from home ownership and investment. As homeownership is the tried and true route to financial security and personal net worth, this will also be beneficial for the economy as a whole.

What Will It Take?

Looking forward, in the short-term, the country needs to put the pandemic behind it. That is why the government’s vaccination campaign is crucial.
In the medium-term, Juwai IQI needs a bridge to get across from the current pandemic economy to the economic boom anticipate to begin later this year and in 2022. That’s why extending the HOC to the end of 2021 is crucial. In the long term, more employment opportunities are needed as this creates demand for property. That is why Juwai IQI’s commitment to hire 1,000 technology and data staff underMDEC’s Digital Malaysia initiative is so important.

The government has also announced a big investment made by global technology giants such as Microsoft in Malaysia, which will also create many new jobs.
Malaysia has the raw ingredients as well as vision and will need these resoures to get past this pandemic and into a more prosperous future. We can all work together to achieve this mission.
* Opinions expressed here are those of the contributor and are accurate at the time of print.