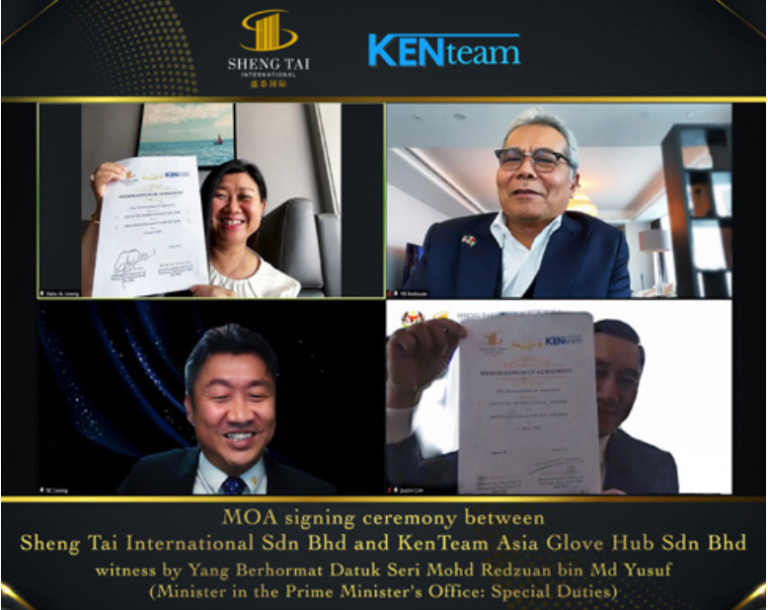 Local developer pushes ahead aggressively, leveraging on the social media platform while undertaking 110 production lines from KenTeam’s GloveHub in Melaka.In its ongoing aim to promote Malaysia, and particularly Melaka for international excellence, award-winning property developer and property tourism specialist, Sheng Tai International Sdn Bhd recently signed an exclusive Memorandum of Agreement (MoA) with Malaysia’s leading latex and nitrile gloves manufacturer KenTeam Asia Glove Hub Sdn Bhd.
The agreement is for Sheng Tai International to offtake 110 production lines from KenTeam’s 90-acre Glove Hub in Jasin, Melaka, which Sheng Tai International was appointed to design, construct and build.When completed, the expected production capacity for each production line is 3 million boxes per annum; hence the total production capacity for all 110 productions lines are 330 million boxes per annum.
A virtual signing ceremony between Dato’ Leong Sir Ley, Founder and Chairman of Sheng Tai International and the Datuk Seri Justin Lim, Chief Executive Officer of KenTeam,
News & Happenings PROPERTY | PEOPLE | PLACES
was held attended virtually by members of the media recently.
The signing ceremony was also witnessed by Datuk Seri Mohd Redzuan Md Yusof, Minister in the Prime Minister’s Office (Special Duties). Dato’ Leong Sir Ley, Founder and Chairman of Sheng Tai International remains optimistic with the company’s positive efforts during the pandemic.
“This provides an entry point for Sheng Tai International into the nitrile glove manufacturing industry that is growing rapidly due to Covid-19 and other infections,” she affirms. Separately, another Zoom media conference was also held at a later stage in which she announced the company’s initiative of engaging influencers to promote their respective products as well as those of the company.
Not to be deterred by tough times, the company, having brought in multiple international brands like IWG, Memorigin and FashionTV to invest in Melaka through its establishments -Metrasquare and The Sail aims to create its very own Sheng Tai VVIP platform to sell and promote Malaysian products and its culture.
In the face of the pandemic, she has urged that the tools of social media be employed to survive and thrive. The company is in good stead as it has branches in China and Hong Kong which are still operating. In addition, she has also launched the company’s Angel Agency to aid society by mobilising the hotel chefs and crew to cook food to be given to those in need and provide other supplies to those hard pressed to survive. Sheng Tai International is currently building its RM6.5 billion mixed-use development called The Sail, situated in the heart of the 33 km Melaka Waterfront Economic Zone (M-Wez). The Sail Phase 1 is set to be completed by this year, making it the perfect partner for international anchor brands to enjoy business opportunities that are available within the development as well as M-Wez.
Recently, Sheng Tai International also announced its plans to elevate The Sail Melaka Phase 2 and 3 as an International Financial Centre and possibly a duty-free hub.