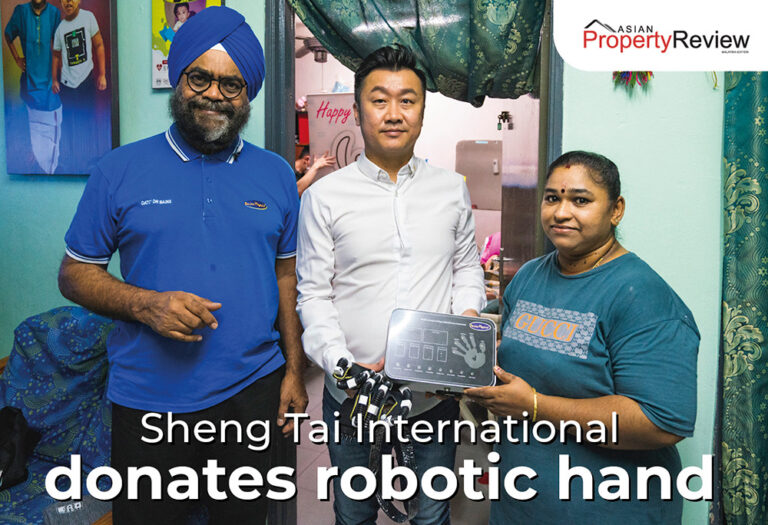 It was a memorable day for Saravanan Krishnan in late June, 2022, as for the first time since a car accident three years ago which had left him paralysed from the neck down, he was able to feel a slight movement to his fingers on his right hand. Thanks to the robotic hand donated by property tourism developer Sheng Tai International (STI), this was going to be the turning point to his bedridden existence since the accident.

“It will be a long and difficult journey ahead but the device would speed up his recovery tremendously,” said Ganeson Raman, the uncle of Saravanan’ s wife. He added it had been very difficult for the whole family as Saravanan’s wife, Lechumy Chella Perumall, had to take care of him and their adopted daughter full time. With no income, Lechumy had to sell nasi lemak in the mornings near their flat in Selayang, Selangor. This is because they had still not received any compensation for the accident as the case was still being disputed in court.

As the family was short of funds, they could not afford the therapy sessions at the hospital and Saravanan’s condition would certainly have deteriorated permanently had it not been for Dato Dr BS Bains, founder and CEO of Bains Physio, who had recommended a robotic arm to be used to rehabilitate him at home.

And through his contact with Vincent Wan, Group Chief Operating Officer of Sheng Life, a subsidiary of STI, a donation was proposed from the property developer through its charitable foundation, Happy Angel Foundation. As Nicholas S.C. Leong, Sales and Marketing Director of STI said during the handover, “A business that makes nothing but money is a poor business.”

In addition to the robotic hand, STI also donated diapers and milk to Saravanan, two essential items that he needed daily.

Happy Angel Foundation was founded by STI with a vision to use modern technology to help the poor and needy. “However, whatever resources we have at the moment can only help a few. To help more such people, we need others in the community to donate as well,” says Dato’ Leong Sir Ley, Sheng Tai International founder and chairman. APR