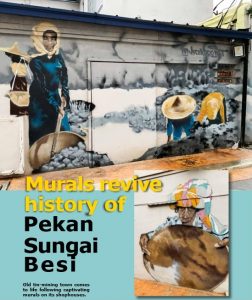 The heritage township that is Pekan Sungai Besi, situated about 10km from the capital city of Kuala Lumpur, has been around since the 1930s when it was known as one of the deepest tin mines in Malaya (as it was then known). In fact, historian JM Gullick in “A History of Kuala Lumpur” wrote that the tin mine was one of the biggest man­made holes in the world covering a total surface area of five hectares.
[ihc-hide-content ihc_mb_type=”show” ihc_mb_who=”1,2,3,4,5,9″ ihc_mb_template=”1″]

Originally a Malay kampong, the area started seeing more Chinese migrants who were brought in by the British to work at the tin mines. Shophouses were then built to cater to the increasing economic activities that followed. These shophouses which are categorised under the Secondary Heritage Zone, are painted greyish colour to resemble the colour of tin ore – the town’s most famous product.
The repainting and beautification exercise which was initiated by Kuala Lumpur City Hall (DBKL) two years ago to honour its rich history also included many murals on the walls facing the backlanes and sidelanes of the shoplots.
These murals give an inkling as to how Pekan Sungai Besi used to look while at the same time providing an additional attraction for tourists.
The township will be more accessible by 2022 when the LRT and MRT’s Sungai Buloh-Serdang-Putrajaya (SSP) Line are expected to be completed. APR
[/ihc-hide-content]