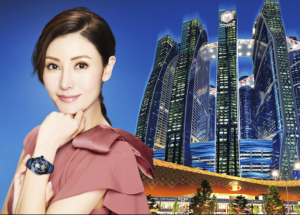 By Yvonne Yoong
The historical state of Melaka is poised to have another crown jewel added to its grand treasure chest with the addition of the iconic mixed-use mega development called The Sail.
And, part of the magic will be one of its towers – MTower which is named by famed Hong Kong celebrity Michele Reis who was invited by Dato’ Leong Sir Ley, Founder and Chief Executive Officer (CEO) of Sheng Tai international to participate in the branding concept of the tower alongside the famous brand Memorigin Tourbillon.

With this collaboration, a limited edition collector’s range of Memorigin Tourbillion signature watches will be launched as part of exclusive gifts for high investment owners of The Sail.
Melaka, being the historical, cultural and economic nucleus of Malaysia is located in a very strategic geographical position which is extremely popular with tourists even to this day.
The mega ambitious The Sail will be the first mega luxury development in Melaka which is poised to raise the stature of this historical state in a bid for the winds of change to usher in another wave of the golden era —- capable of attracting people from all over the world here —- which preceded its reputation as the world’s central trading hub as far back as the 16th century.
Incidentally, The Sail is envisioned to be the second national landmark of Malaysia after the Twin Towers.

Reis shares that she counts herself highly honored to be a member of the extraordinary team responsible for creating a new iconic landmark for Melaka, which is rich in culture and tradition.
The Sail with a Gross Development Value (GDV) of RM6.5 billion will comprise l nine unique podium buildings which are connected by a huge Sky ring structure including three luxury hotels, three residential buildings and three office buildings.
The facilities in this mega huge mixed-use development are included to impress which include the lunar Virtual Reality (VR) exhibition hall, the longest boundless sky pool in Melaka as well as the largest sky garden in the historical state.
In addition to this, The Sail will also encompass the Sky Corridor as well as a two-storey Convention and Exhibition Hall, Exhibition Hall and Memorigin Experience Hall, among other attractions and facilities.
The Sail is envisioned to complement the New Jonker Street (Cultural Square) which is a key tourist area in Melaka.
MTower by The Sail will add a regional appeal to the iconic landmark development created by Sheng Tai international in which the branding design input of the tower’s logo and design concept bear Michele Reis’s signature input.
Levels 11 to 25 of MTower will be complemented by six-star luxury hotels while levels 26 to 52 will comprise high-end serviced apartments.

“MTower is named by Michele Reis because M represents not only Michele’s nickname but also represents the beginning letter of the words Melaka, Malaysia, magic, magnificent, majestic, marvelous, masterpiece, mesmerising, multi-dimensional and so on,” says a spokesperson on behalf of Reis.
“The hexagonal shape of the cube gives people a sense of stability and consolidation.
“Meanwhile, the heart emblem hidden in the middle of the letter M shows that this is a project built with heart while embodying the appeal of luxury and it being extraordinary,” adds Reis.
She continues to share that the chosen pattern was hexagon by virtue of it being “a common pattern in nature such as can be found in honeycombs, snowflakes and tortoise shells”.

“The hexagon shape also appears in footballs and screwcaps, etc. Hexagon shapes often also appear in the world of science and physics. And, it has the best effect in geometry. It can also fill a large area of an airplane, and the total perimetre to do so is the least. Famous architects also like to add hexagons to their works,” she observes.
Another idea attributed to the project lies with Reis having specially selected Memorigin’s customised MI collection Tourbillon watch to be given as exclusive gifts to The Sail’s high investment owners.
“These are not only beautiful Tourbillon watches but also a key for MTower owners to optimise their intelligent and ideal lifestyles,” she says with a smile.
The team is now actively developing relevant technologies, with details to be announced later.
The Memorigin MI Tourbillon watch collection comprise a very special edition to celebrate and commemorate Memorigin’s 10th anniversary and IPS’s 30th anniversary of public relations advertising.
Meanwhile, the MI collection is set in the romantic Star City. It is decorated with a diamond iPANDAS (the mascot of IPS).
Standing on the six o’clock Tourbillon window, the iPANDAS uses both hands as hour and minute hands to tell time.
The biggest selling point of this series lies in its “uniqueness” in which the watch’s pointer can be customised in line with the special shape according to customers’ requirements in relation to English letters, numbers or logo.
“We can also choose the colour of the watch strap at will to ensure that there will be no collision,” she explains further.
Reis appreciates the unique watch design as much as Founder of Sheng Tai Dato’ Leong.
Sheng Tai International, the main developer of MTower, works in unison with its co-Developer named Pioneer Fort International. All parties are happy and appreciate the end design which complements the themes of MTower to a tee.
In order to synchronise with the theme of “MTower”, the clock hand of the iPANDAS is capable of transforming into a cube logo with the word “M”, while the minute hand holds a star magic wand, showing childlike innocence.
“I’m delighted that iPANDAS has turned into a magician, waving a magic wand and bringing happiness to people,” says Reis.
William Shum, Founder of “Hong Kong tourney” Memorigin, says that he is pleased that the MI collection was appreciated by Reis. He is also very thankful for this tie up which has enabled him to participate in the largest comprehensive development project in Melaka.
“As Memorigin enters its 10th anniversary, one of our priorities this year is to implement the customised Tourbillon watch service, which not only increases the value and significance of the watch to customers, but also symbolises the perfect manufacturing process of our brand.”
MI collection Tourbillon wristwatches adopt the tourbillon movement developed by Memorigin, which is composed of 153 components and 25 gemstone bearings. It has 72 hours of power storage, while its vibration frequency can reach up to 28,800 times per hour, making the timepieces aesthetic marvels in terms of beauty and accuracy.
For further details of MTower, log on to www.themtower.com