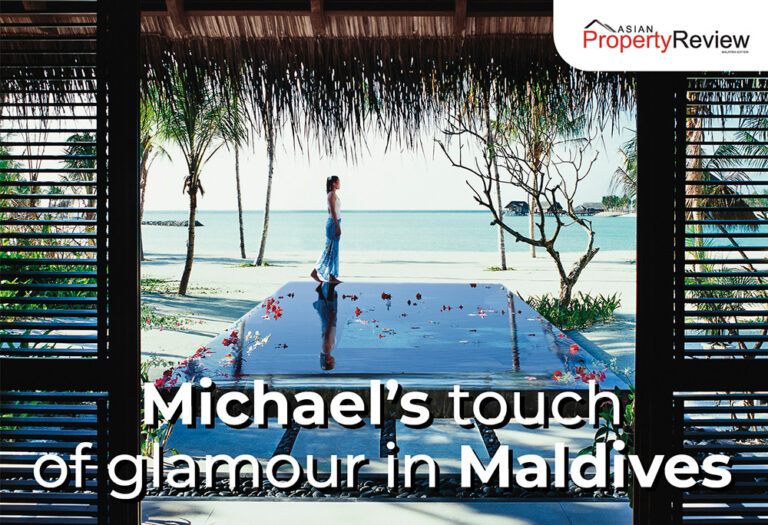 Michael’s touch of glamour in Maldives

Now a Partner of OXO Living, Michael Luible had previously opened and operated some of the world’s most glamourous resorts. Here, he narrates his experience of opening One & Only Reeti Rah in The Maldives.

After a long and exciting career in luxury hospitality, running some of the world’s most legendary hotels and resorts, I am delighted to finally be setting up my own exclusive hospitality group in Bali, together with business partner Johannes Weissenbaeck.

It’s exciting to be able to bring all the experiences I’ve had orchestrating great hotel stays for high-net worth individuals across the world to creating and curating a luxury lifestyle for them in Bali. At OXO Living, we are developing chic townhouses and remarkable one-of-a kind villas for investors from around the world.

Prior to joining this group, I came to Bali in 2010 to oversee the repositioning of The Seminyak Beach Resort & Spa, Bali into one of Indonesia’s finest beachfront boutique resorts. And before this, I headed some of the world’s most iconic ultra-luxury resorts such as One &Only Reeti Rah, Maldives and Capella Singapore. Asking myself what I would have done differently in my

“In came barges with more than 16,000 matured palm, frangipani and other tree species and over 2 million plants from neighbouring islands.”

long and versa tile hospitality career, there is thankfully really not so much. I think I have been very fortunate living and working in some very exotic locations, working with amazing people to conceptualize, open, position, operate, and manage some truly unique hotels and resorts. Looking back, there are two very distinctive properties that really became the pinnacle and epitome of my professional life One & Only Reethi Rah, Maldives and Capella Singapore.

One & Only Reethi Rah, quite literally meaning ‘beautiful island’ in the Maldivian language of Dhivehi, was indeed a very bold, unconventional project. A tribute to the late Sol Kerzner, it would certainly not have been possible without an aligned vision between owners, developers, investors and operators, world-class architects and designers like Jean-Michel Ga thy from Denniston Architects, landscaping architect Bill Bensley and everybody’s effort and dedication to overcome challenges and obstacles – and there were lots of them as we went along and later realized what we had gotten ourselves into.

It was an extraordinary feat of master engineering. We really pushed the bar to the extreme. The objective was to develop a resort with villas of unprecedented design, luxury of privacy, space and exclusivity. During various feasibility studies, it became clear to us that the initial island was too small to allow for a certain critical mass of accommodation, facilities and infrastructure to make the numbers work.

The idea was tabled to enlarge the island- and we did just that. In fact, six times the original size to 44 hectares. Its unique octopus-like shape now allowed for 12 individual coves and beaches, providing an incredible 6,000 meters of fine white sand coastline -a truly unprecedented creation.

Upon receiving environmentally sustainable expertise, guidance and clearance, sand was dredged and pumped by deepening an existing navigation channel to enlarge the island. The sand had to be compacted and the beaches protected from erosion with coastal engineering and large rock revetments. With this, we created a sort of “desert island”, which now needed to be greened and landscaped with lush vegetation to complement the existing island. In came barges with more than 16,000 matured palm, frangipani and other tree species and over 2 million plants from neighbouring islands planted to provide the foundation for the lush, tropical landscaping upon the resort’s opening.

You could look over the horizon and see an immense banyan tree floating on a barge in the distance. We even created our very own orchid unique to Reethi Rah in Sri Lanka and developed our own orchid farm with 2,600 orchids and even a vegetable, salad and herbs garden to eventually supply the 130 villas, five distinctive restaurants and bars.

During this stage, we lived in a simple staff accommodation and shared the existing island with some 2,500 people that included project managers, general contractors, construction workers and laborers, people that look after people – as they pumped the sand, shaped the land, reinforced the structures, and began construction of the first One & Only property developed from the ground up. It was an immense task. We had mess tents for workers of different religions and food requirements, and a cafeteria and bar for the management. Food was simple – fish curry, dal and rice, rice, fish curry and dal. How much I looked forward to R&Rs in Singapore and bringing back some bread, jam and cheese!

Life was very basic, but this was an incredible lifetime experience. The initial focus was on developing an efficient and functioning back-of-the-house, with five genera tors, a reverse osmosis and desalination plant, staff accommodation and facilities, a clinic, meeting rooms, etc.

Essentially an entire village. We needed to focus on every operational detail, ensure that the highest standards are met with precision and consistency, and that the resort will be immaculate when opened to its first guests. Building works began in February 2003 and finished in April 2005.

Weaving all the elements of the island together to create an unprecedented level ofluxury and unparalleled service levels requires great dedication, inspiration, and passion of the people. I feel very fortunate to be able to identify and recruit an elite team – the very best in their respective craft, who supported me all the way through. An Italian Executive Chef, a Japanese Sushi Chef, a French Pastry Chef (I believe our croissants could rival the best in Paris), a British Sommelier, an Australian Chief Engineer, a South African Executive Housekeeper, an Indonesian Spa Manager etc.

They were leading a team of over 600 people of almost 20 nationalities, including dedicated sand-rakers and coconut collectors, and the pool attendants who come to clean your sunglasses and place chilled cucumber on your eyes …. Most of our team members were, of course, Maldivians. Many of them were recruited from remote islands and their initial training focused on mastering the standards, such as grooming, hygiene and basic English.

Fortunately, they all carried wonderful island smiles and such pleasing demeanors that almost compensate for everything. The interview process was the most important for me. Candidates for roles requiring non-highly specialist skills could come from all kinds of industries but we made sure that those chosen possess the intuitive desire to serve as gracious hosts. We interviewed an average of three candidates for each position and conducted recruitment trips to Sri Lanka, India, Jakarta and Bali.

It was very clear to me that, whilst the destination itself – an idyllic island kissed by the sun and embraced by the most pristine turquoise sea – is a ‘wow’ in its own right, it must be the intrinsic desire of our team to care for our guests with genuine delight that permeates the entire resort for truly special guest moments. Our team must be empowered to make decisions, to make things happen and to create memorable moments.

So long as it is moral, ethical and legal, everything was possible. They were taught to anticipate and look for subtle nuances of each guest and to react accordingly. Eventually, even the most discerning guests – and we soon welcomed many of them – fell in love with our team – some even went a step further to recruit them for their houses or yachts back home. While this was obviously hard for me to digest, it also made me happy as I was able to play a part in their journey. My team members are truly the stars of the resort and until today, I remain so thankful to stay in contact with some of them.

Another exciting task was to create the “pre-opening” buzz with glamorous events hosted in London, Paris, Moscow, Singapore, Hong Kong, Tokyo as well as a super yacht off Monaco. Branding and marketing plans were carefully orchestrated to position the resort as the ultra-luxurious and most intoxicating tropical playground for the most influential,

“Then came haute couture fashion designers, the who’s who of the film and music scene, owners of banks and business magnets, royalties, Russian oligarchs, owners of F1 team and their star racers, famous soccer players accompanied by their trophy wives…”

powerful, successful and interesting people in the world. We needed to get everything perfect to set the resort up for success. A lot was at stake during these early days.

One & Only Reethi Rah eventually opened its shores to our first guests in May 2005 with 130 beautifully appointed Beach and Over-Water Villas surrounded by lush landscaping, five distinctive restaurants and bars, a wine cellar that holds over 9,000 bottles, a spa village with state-of-the art gym and tennis courts, a boutique stocked with exclusive items such as the Anya Hindmarch designed limited-edition One & Only beach bags, the Matthew Williamson exclusive One & Only kaftan and Christian Louboutin designed One & Only sandals.

Other recreational facilities and amenities included 40 swimming pools, a kids and teens club, 4 luxury yachts, over 100 golf carts and 260 bicycles. We also imported caviar from Iran, toro and abalone from Japan, king crab from Russia, over 20 different cheeses from Belgium, Italy and France, ‘Jamon de Pata Negrac’ & ‘Jabugo’ ham from Spain, ‘San Dainiele’ & ‘Parma Ham’ from Italy, Wagyu beef and lamb from Australia, white peaches from Spain, 10 sorts of berries and many more epicurean specialties to create the finest cuisine 24 hours a day for over 200 discerning guests in a most remote location.

We also ensured that our hardworking team of over 600 members continue to stay well fueled. We were truly setting unprecedented benchmarks for the resort industry worldwide and One & Only Reethi Rah became probably one of the most publicised resort launches ever with 24 front page covers, 22 TV features and over one billion media impressions in under one year – It was truly one and only. The grand opening event was a glamorous party, coinciding with the launch of Harper’s BAZAAR in the United Kingdom and attended by fashion and film celebrities from Europe, who were flown to Maldives via Dubai on a One & Only chartered plane. And then came haute couture fashion designers, the who’s who of the film and music scene, owners of banks and business magnets, Royalties, Russian oligarchs, owners of Fl teams and their star racers, famous soccer players accompanied by their trophy wives …

With everybody’s hard work, our vision was realised and One & Only Reethi Rah truly became a tropical playground for the rich and famous. Our Festive Season events became legendary and part of the exclusive international social calendar. We were eventually booked out months in advance and I could have almost auctioned off villas. It was an incredible buzz. We flew in fireworks on a private jet since they are not allowed on commercial flights, salvaged a golf cart with exclusive luggage from the lagoon, organised glamorous events for celebrities on secluded sandbanks that become invisible during the high tide -there was never a dull moment. .. I am deeply heartened by the many prestigious awards and recognition the resort has and continues to receive following its successful story of 17 years. APR