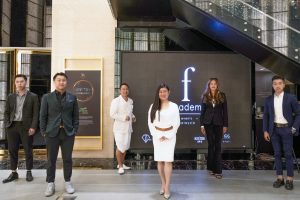 Making Melaka The Milan Of Malaysia

Big plans are in store for the historical state of Melaka, now that the iconic deal has been inked with FashionTV Paris

By Yvonne Yoong
The pandemic may have given its best onslaught, shaking everything in sight with terror and gripping many businesses in fear. However, the age-old paradigm of the Chinese character comprising two symbols — that of crisis and opportunity embedded together holds age-old wisdom that is applicable now more than ever, with the second symbol denoting opportunity. Not waiting without any action plan in place, local developer Sheng Tai International Sdn Bhd (STI) grabbed the bull by the horns and its capable and ambitious team hatched and strategised a working blueprint of turning Melaka into the Milan of Malaysia.

Dato’ Leong Sir Ley, Founder and Chairman of STI is optimistic about its plans in achieving this with enviable tie-ups including the likes of FashionTV Paris on board to launch its first-ever FashionTV Paris Academy in Malaysia. Comprising an ambitious action plan in place, she shares how this strategy falls strategically in place with the successful launch of the group’s ambitious and iconic venture of its iconic mixed-used development called “The Sail” with a Gross Development Value (GDV) of a whooping RM6.5 billion.
“We want Melaka to be like the Milan of Malaysia as it is similar in terms of its richness in culture, historically and heritage-wise. Plus, it has the potential to also be turned into a fashion hub. Not just a fashion hub but one which has heritage, historical as well as cultural value,” she shares of the concept in place.
This is altogether achievable to her as already in place is the strategic sign up with FashionTV Paris forming ties with Paris International. With this collaboration, FashionTV Academy will also usher in a kaleidoscope of international brands.
“We are not forgetting our local designers and are using this opportunity to brand Melaka into a fashion hub while also including the historical and cultural components. Also, at the same time, we are giving opportunity to fashion designers in Malaysia to showcase their talent to the world,” she elaborates.
Roping in the expertise of renowned local fashion designer Bill Keith to oversee this mammoth task was a natural choice.
Besides Keith overseeing roping the fashion designer side of things, former beauty queen Betty Anne Brohier is also joining forces to oversee the model aspect of lauching this talent initiative of producing world-class super models by way of mooting FashionTV Academy, the sky’s certainly the limit.
“The FashionTV Academy in Malaysia originates from Paris. We’re partnering FashionTV in launching this great initiative that not only deals with fashion but also extends to include modelling courses for kids.
“Talent is a very important aspect. With this partnerhsip, FashionTV Paris is doing a unique venture by embracing the Muslim culture by allowing hijab and tudung in the fashion collection,” she adds.

“Creating a fashion hub is not easy or something that happens overnight. We have to gather the manufacturing industry and other fashion players together. Everyone is playing a waiting game but you need to gather everyone to collaborate. A fashion hub is not just about clothes but entails lifestyle in the food you eat, fashion you portray and how you live. It’s about things that make people happy. To make this possible, we need to gather every single entity – from government bodies and apparel organsitions to fashion designers.
“I’m not saying it is impossible but we need one mind and one destination to make it into a fashion hub. Malaysia is very rich in history, cultural diversity and cultural values so we need to bring this message to the world,” says Bill Keith, Partner of FashionTV Malaysia.
Since Melaka used to be the trade centre and R&R (Rest & Relax) hub of the world, he advocates reinventing it to become a property and fashion hub via intellectual property whereby people come from all over the world to study about the past, its people as well as focus on Malaysian food and culture.
“FashionTV has been around for ages — showcasing fashion shows and fashion brands. With Sheng Tai getting the FashionTV franchise in Malaysia, it’s a stepping stone to get our brands to the world in how we market ourselves out of Malaysia and get us known. “I’m putting together a pool of Malaysian designers for this purpose. And, the idea is to also hone talent and look at fashion designers in Malaysia from an entrepreneurial angle,” he says.
“We must get ready now and give ourselves five years down the road. I’m here to guide the designers and up-and-coming designer plus student designers and to nurture more of them. There’s a crossover in culture and in our design. We are different from the rest of the world . We’re uniquely ourselves but the designers need to really focus and come out with the most original creaitons for this fashion hub,” he concludes.

FashionTV Malaysia aims to take Malaysia’s fashion industry to the next level with its collaboration with FashionTV Paris. Leading the charge of ensuring that a bevy of high-calibre supermodels are produced is none other than ex beauty queen and former Miss Malaysia Asia Pacific 1984 Betty Anne Brohier in her capacity of Partner, FashionTV Malaysia, Overseeing FashionTV Academy, professional certificates will be awarded in which modelling courses for children and teenagers, male and female models as well as photography and modelling courses will be made available. The courses will also offer social etiquette and corporate etiquette courses which will benefit even people in the workforce in need of the art of finness and makeover.
“In view of Melaka being a historical place, many tourists go there for the historical buildings. It is against the amazing backdrop of historical buildings that fashion shoots too can be conucted,” she says drawing a striking parallel with Milan being Italy’s fashion hub.
She affirms that the idea is to thrust Melaka into the global spotlight as a one-stop hub to get specialty clothes and shoes plus accessories brands.
The fact that FashionTV Malaysia will host the first FashionTV modelling academy in Southeast Asia is certainly no mean feat.
Indeed, in collaboration with FashionTV, an international and highly sought-after platform for trending fashion and lifestyle broadcasting, STI will be launching Southeast Asia’s first FashionTV Modelling Academy which will be located in the 5-star Ames Hotel in Melaka.
The modelling academy will be introducing an innovative and avant-garde approach to the study of fashion modelling. Everyone from all walks of life will be welcome to explore their passion for fashion with training from both local and international trainers in a unique once-in-a-lifetime opportunity for some and the pursuit of a new life for many.
The curriculum at the modelling academy will also promote a collaborative and creative approach while providing students with an unparalleled training facility. The academy will provide professional modelling classes for everyone, including children and aspiring Muslim models.
Adults who are interested in joining the modelling academy will have to be at least 170 centimetres tall.
A licensing agreement was signed between Dato’ Leong Sir Ley, Founder and Chief Executive Officer of STI and Alona Fischbein, Director of FashionTV to cement the collaborative effort recently. STI states that the tie-up was because of FashionTV’s “international standing and recognition”.

Sheng Tai International Sdn Bhd (STI), formerly known as Sheng Tai Realty Sdn Bhd is a diversified property development, real estate, investment management and hospitality company with specialised expertise in the area of property tourism. Founded by Dato’ Leong Sir Ley, one of Malaysia’s very first businesswomen who single-handedly ventured out of the country by setting up a significant network of real estate investment platform overseas, the company offers various categories of quality investment grade products with professional services. This is in line with the company’s aim for productive collaborations and corporate partnerships with the focal point of providing its foreign and local guests with comprehensive solutions and a tailored experience.
Established in 2012 amid the storm of global economic turbulence, the group’s continuing success is credited to its ability to swim against the tide and seize opportunity in every challenge. Its commitment to growth and quality excellence is an approach that has changed little since emerging as a budding enterprise.
Locally, STI is well-known in the industry through its subsidiaries such as Plentifield Marketing Sdn Bhd and Sheng Tai Impression Sdn Bhd. On the international front, its presence is currently marked through its overseas arm called Sheng Tai International (HK) Limited which has been operating since 2012 and has served as an important gateway to the Hong Kong and Chinese markets. The company also recently opened its China’s flagship branch in Shanghai in September 2019; Tokyo in May 2020 and Beijing in October 2020.
Today, award-winning STI has branched out across various parts of Asia — offering an extensive range of real property products, services and brands that cater to the luxury, upscale and economy markets. STI now has more than 500 personnel who are highly passionate and energetic, ensuring top quality services for its customers. The team is driven by strong corporate values that emphasise integrity, professionalism and trustworthiness. Continuing its ethos of passionate expansion and conscientious innovation, STI aims to set a benchmark as the curator of contemporary living and the leading influence in inventive real estate business models.
For more information about Sheng Tai International, please visit: http://shengtaiinternational.com

FashionTV (www.ftv.com) is a global 24/7 Television Network with its exclusive focus on fashion, beauty, design and lifestyle elements.
Since it was founded in Paris 1997 by Michel Adam, President of the company, FashionTV has become one of the most distributed satellite channels in the world.
It is now received on over 500 million Pay TV, with 60 million Smart TVs, 1.5 billion smartphones as well as 10 Million hotel rooms and public places worldwide. Distributed via 81 satellites, FashionTV is also present on Facebook, Instagram and Twitter.
The Company operates from its offices located in Paris, Milan, Bangkok as well as its headquarters in Vienna.