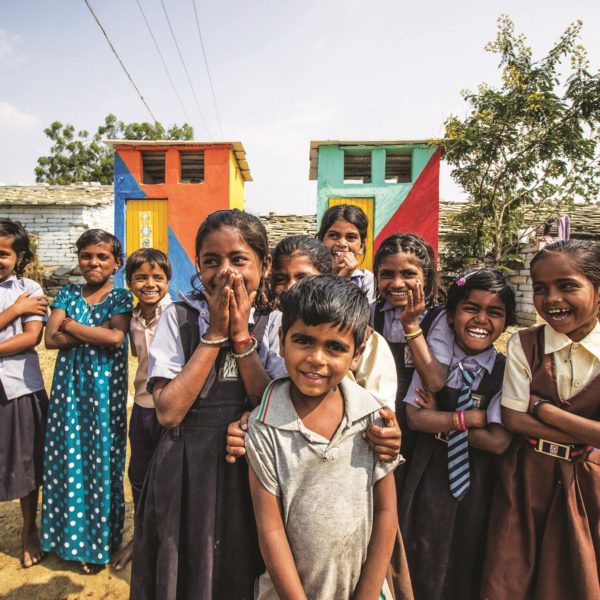 HOUSING THE HOMELESS WITH TENTS

billionBricks’ unique tents are saving the world’s homeless. “There are one billion people in the world without a home, a number that will double in the next 15 years.”

With that in mind and a strong desire to house the homeless, Prasoon Kumar, together with his former employer, Anurag Srivastava, co-founded billionBricks, a design and innovation studio with the sole purpose of providing high-quality solutions to end homelessness. As the CEO, Prasoon in charge of the overall execution of its vision.

The former architect however didn’t foresee the various challenges that they have to undergo, chief among them is getting the funds in, followed by the long hours needed to strike up partnerships and the long waiting period to see returns or impact.

“A lot of non-profit organisations (NGOs) are not at the top of people’s minds so there is no sense of urgency. I feel people need to treat for-profits and NGOs on an equal footing in terms of what we can deliver, accountability and talents,” Prasoon expresses his concerns. This is why he thinks billionBricks is still quite a distance away from what it was set up to do. Since being founded 5 years ago, it has housed about 4,430 people comprising mainly refugees and disaster victims, spanning across the globe from India and the Middle East to America.

Prasoon has big plans for billionBricks. In the next five years, it plans to house 100,000 people across the globe. It does this by planning big – by identifying large global problems and working closely with people who need help, as well as coming up with solutions such as a unique model that is scalable and new models of fund-raising. It also emphasises a lot on networking which explains why it has an office in Singapore (aside from the fact that Prasoon resides there).

Explaining its Singapore’s presence, Prasoon says: “It is a good place to attract talents and push new ideas as there is a lot of support system. This allows us to have more reach globally which aligns with our vision to go global. It is also a great place to build up our network and credibility. This helps in our fundraising efforts.”

Besides Singapore, it has offices in India and the US where they deploy their tents and raise funds, amongst other activities.

Raising funds is perhaps the most important activity that sustains the venture. As Prasoon notes earlier, it is hard to convince people to give to NGOs. “The money can be small but the accountability for how it’s used is very high. It’s very hard to raise money for staff salaries, for example.”

Having said that, the CEO believes that there is a lot of money out there sitting waiting to be disbursed to deserving NGOs. “The problem is that NGOs don’t do a good job in marketing and connecting to get funds.”

On the other hand, in the case of billionBricks, it seems that the noble cause it espouses has resonated strongly with a number of Hollywood celebrities who have given it a ringing endorsement. It also counts among its supporters a respectable number of multinationals.

“Yes, the celebrity endorsements have given us a lot of credibility. It made us potentially the only NGO from Asia working in Western countries like America. Typically, Western organisations will go to Asia but never the other way round. This will certainly help scale our work up to 25 times in the next 5 years,” Prasoon hopes.

Demand is currently outstripping supply. There are about 500 tents in circulation now housing an estimated 2,500 people. The raw materials for the production are all sourced from China. Eventually, they plan to shift production to the US as they have a partner there who works with people with disabilities in production.

The scale of deployment itself is about 500- 1,000 tents a year, with plans to ramp up distribution to 10,000 -50,000 a year in the foreseeable future. Distributing the tents is fairly straightforward and fast – “all it requires is for someone to call us, and then we ship them.

He continues: “Of course, we need to get the logistics right so the tents can be moved more effectively and easily. To do that, our strategy is to go and start partnering with corporations or brands to increase effectiveness.”

Starting 2019, billionBricks will also be expanding into a range of related products through partnerships with big companies across the world. “We plan to come up with a suite of items that the homeless would need such as jackets, blankets, solar lights, etc.”

Made of nylon, fibre-reinforced mylar and polyester wool (insulation), the tent is highly durable and can last years with the only necessary maintenance being cleaning. A typical turnaround time would be about 2 ½ years when families would move on and the tents would be put to use for another family.

There are additional variations to the current basic tent, the all-weatherHyde which is a much larger tent that meets international standards. The latest is the podHyde which has lights and is easily dismantled and reused. The pods are currently deployed in India after a typhoon recently. It has a 3-5 year lifespan. showerHyde meanwhile is specifically designed for showering and is especially useful for women and girls.

Another variation is Solar home which uses solar energy to finance the house. It has a 60- year lifespan with very scalable features. Due to its long lifespan, this can be used as a permanent home.

All the products are designed in Singapore by billionBricks design team, bB studio and are available for sale online. For the basic tent, there are several features which make it unique – it’s the only tent in the world that is 3–layered providing insulation and opacity as opposed to camping tents. It is also lightweight and easily set up – it takes only 12 minutes for a single person to set it up. Furthermore, it is reversible thus prolonging its lifespan. Tracking it is easy due to the embedded QR code.

Among billionBricks’ most useful concept ideas is a program to match the homeless to vacant houses in cities, enabling co-ownership. Not only does urbanHyde solve the deepening housing crisis in cities across the globe, it also helps investors with a pool of ready tenants. The rentals will be subsidised by billionBricks which would identify the appropriate tenants and do the matching. Explains Prasoon: “This concept bridges the financial gap for long-term affordable housing of the poorest families. They are part of our social responsibility, hence the subsidised rentals. However, we do not restrict the owners’ right to dispose off his property.”

Proposed by its Urban Crossover project team, urbanHyde is still at a conceptual stage and may possibly see the light of day only in 5 years’ time, reckons Prasoon.

Meanwhile, if the funds allow, expect billionBricks to fulfil its vision at a faster rate even as more people join in its vision and spread the good news.