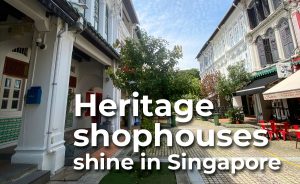 Demand for conservation shophouses, boutique hotels and good class bungalows in Singapore as trophy assets for wealth preservation is on the rise.
There is increasing activity from private investors and investment funds buying up a collection of conservation shophouses and boutique hotels in historical buildings over the past 12 months in Singapore. This trend of buying “historical placemaking properties” will continue to rise for 2022, especially for ultra-high-net-worth individuals, who are also actively snapping up Good Class Bungalows in Singapore, predicts Simon Monteiro, Singapore’s leading shophouse and boutique hotel specialist at List Sotheby’s International Realty.
“Conservation shophouses, boutique hotels and good class bungalows all have three attractive qualities as trophy assets – they are limited in supply, have great historical value and come with their own unique story. This appeals to ultra-rich investors because ownership of these assets is akin to owning valuable fine art on top of owning a piece of Singapore’s history,” Monteiro says. The Associate Vice President of List Sotheby’s International Realty adds that some of his clients buy them to pass them on to the next generation.
Monteiro also likens owning a historical placemaking property to being part of an exclusive members club where there is only a limited number of memberships, and a long waiting list. It is about the prestige and exclusivity of being part of this small social circle of owners where irrespective of the prices, there aren’t enough of these properties due to strict regulatory guidelines to preserve Singapore’s heritage. Additionally, buyers and sellers typically are very private people, so the properties are often marketed confidentially thus preserving the ‘’exclusive club” aura.
Only Singaporeans are allowed to buy Good Class Bungalows, while foreigners are only allowed to buy conservation shophouses and heritage buildings earmarked for commercial uses in the landed property segment.

Centred on placemaking
Placemaking properties are part of the character of a neighbourhood and investors see the value of the properties’ heritage. Some are drawn to the provenance of the architecture of the buildings, or the stories of the people who had once lived there, or even the historical significance of the streets or roads where the properties are located.
Furthermore, property developers around the world have started to illustrate how homes can rise in value when they are built in neighbourhoods and distinct districts that have their own story or “character”.
[ihc-hide-content ihc_mb_type=”show” ihc_mb_who=”1,2,3,4,5,9″ ihc_mb_template=”1″]
To help uncover these one-of-a-kind stories, Monteiro has collaborated with Dr Julian Davison, an architectural historian and author of books like Singapore Shophouses and Black & White — The Singapore House 1898-1941. Davison’s books provide unparalleled knowledge of the historical properties to potential buyers.

Massive appreciation
As an investment asset, Singapore’s heritage shophouses located in prime areas, have undergone massive appreciation over the years. For instance, a shophouse that Monteiro sold in 2005 at Duxton Hill at S$385 psf was valued at S$3,000 psf, based on
built up area, in 2021, an almost 700% appreciation over a span of 16 years.
In the past five years, prices have soared exponentially. Two shophouses in Club Street that Monteiro helped to sell transacted at a record price of S$3,935 psf. In comparison with current prices for apartments in Singapore’s Orchard Road, where prices could reach S$6,500 psf, these placemaking trophy assets present themselves as a potentially more attractive investment.

Monteiro is currently marketing three heritage boutique hotels that are all made up of conservation shophouses in Singapore’s Little India district. Called the Hastings collection, they are named aptly after a road In the heart of the district commemorating Lord Hastings, a former governor-general of India and at one time, the superior of Sir Stamford Raffles at the British East India Company. Under the auspices of the East India Company, Raffles established a trading post on the island of Singapore in 1819, thereby becoming the founder of Modern Singapore.
“Ownership is akin to owning valuable fine art on top of owning a piece of Singapore’s history.”
The recent flurry of activity in the Singapore real estate market for historical placemaking properties, has aroused the interest of Monteiro’s former investors who have reached out to him again to source for properties to add to their portfolio. This accounts for why Monteiro is confident that the market in 2022 will see even more activities – amid an exponential rise in prices.

Conservation Shophouses and Boutique hotels: Since 1989, Singapore’s Urban Redevelopment Authority (URA) started its conservation programme and conserved over 3,200 buildings, including shophouses in the districts of Chinatown, Little India, Kampong Glam, Boat Quay, Clarke Quay, Cairnhill and Emerald Hill. In the past two decades, investors have been rejuvenating these assets, in which some conservation shophouses have been converted into boutique hotels.

Good Class Bungalows: A Good Class Bungalow (GCB) must have a minimum plot size of 1,400 sqm and is limited to a maximum height of 2 storeys. It must be located within the 39 gazetted GCB Areas. Including bungalows on smaller plot sizes, there are a total of 2,700-plus bungalows in these GCB Areas, some of which are earmarked for conservation because of their historic value.