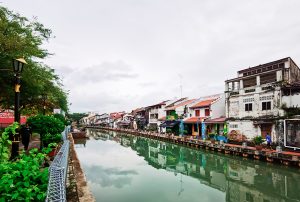 Besides taking in the sights and sounds along this river steeped in history, a rich lesson in architectural appreciation also awaits tourists and visitors joining in the cruise.
Taking YES (PropertY PeoplE PlaceS) Paper readers beyond just a scenic tour, unveiling the real architectural influences of Melaka is a given along this river cruise.
The Straits of Melaka, being one of the most strategic shipping channels between the Indian Ocean and the Pacific Ocean was an attraction magnet as a port — attracting both the Eastern and Western traders here. European traders such as the Portuguese, Dutch, British as well as Asian migrants in the later centuries came from near and far to trade their wares in this thriving port which rose in stature from a humble fishing village in the 14th century to worldwide acclaim.
Taking a scenic tour along the famed Melaka River yields an eye opener into the rich legacy of the Melaka architecture of old.
Travelling on this scenic river cruise, and going beyond the usual tourist appreciation that unfolds during the river cruise, the historical buildings throw hints as to the context of what is shaping today’s architecture in Melaka.
Here are some fascinating sights dotting the landscape.

Kampung Morten is the only Malay reserves heritage village that is upheld by the Preservation and Conversation Enactment in the heart of Melaka city. The land was originally subdivided into 100 lots and this is where the Melaka state government named the main street as Persiaran Datuk Othman. Most of the Malay houses here are known as “Rumah Panggung” (stage houses) built on stilts.
This was to prevent wild animals, mitigate floods as well as to deter burglars and serve ventilation purposes. The vernacular Malay roof shape to serves the purpose of providing shade and protection from heat, rain while facilitating a heathy ventilation flow throughout the interiors.

One of the landmark neo-gothic designs of the old Portuguese Catholic Church was constructed by the French Priest named Father Farvé in 1856. He was one of the earliest Catholic missionaries who was active in South East Asia with the church known as “Apostle of the East”.
The remarkable style of architecture comes with the revival of the Gothic style design with the pointed arch shape of doors, windows and facet of the buildings.
Other sights that can be seen along the cruise include Villa Sentosa, Hang Tuah Bridge, Mural Drawing at Kg Jawa, Synchronize Water Foundation, Jambatan Chan Koon Cheng, Melaka Tree at Padang Nyiru, Malacca Clock Tower and the Tan Kim Seng Bridge.
Highlights of the trip:
• Glimpse the sight of the traditional UNESCO Preserved buildings with western and eastern architectural influences.
• A diverse mix of both traditional and contemporary buildings that has emerged and been transformed from our the cultural influences stemming from the Malay, Chinese and Indian
community.
The colourful lightning effects by night serve to accentuate the landscaping details, fountains, bridges and buildings that are all connected to represent the true historical story of Melaka.
The appreciation of artists drawings on the buildings relate the story of Malaysian heroes like Hang Tuah and Hang Jebat.
• View the standardisation of the UNESCO buildings along the river cruise that is quite impressive and stunning. The Melaka State Government has done great job in standardising the UNESCO buildings and making it relevant in a distinctive Melaka style. This complements the overall town planning arrangement.