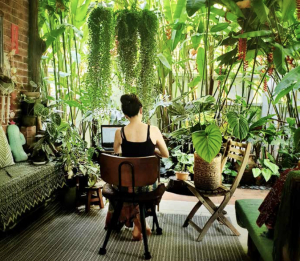 Creating Her Own DIY Tropical Paradise During Lockdown

My garden journey started about three-and-a-half years ago since we moved into a new place that had a much bigger piece of land spanning across 1500sq ft. We fell in love with the place instantly as the previous owner was a nature lover and had planted a lot of trees all around which enveloped the house in greenery. It was a truly magical feeling and love at first sight when we stepped into the residence. The place also came with the presence of a lot of heliconias. I think that sealed the deal for me – the Heliconia Rostrata that lined up the backyard which really exuded a tropical feel for the entire residence.

As with any new homeowner, we rolled in the contractor to do some minor touch-ups prior to moving in. One day my husband told me to brace myself for some bad news. Apparently, in an attempt to paint the garden wall, the workers broke most of the heliconias. I was beside myself with anger and grief. With completely no understanding of plants and gardens, I demanded the contractor buy me back a whole of lot mature heliconias to replace the ones that were destroyed.

And, when I saw that the area was not yet sufficiently filled up by my standards, I went out to buy more myself. The whole
place was a disaster three months later when the strip of backyard was simply jammed with too many heliconias, with the original ones now growing out and competing with the two new batches brought in and it was a mess with them falling all over each other. I sought the help and advice of a nearby nursery owner who made me dig up everything out, discard many and plant just a few heliconias to allow them time and space to grow. That was my first gardening lesson which is not to rush and allow the garden to mature naturally.
[rml_read_more]
Thus, begin my garden journey. I started out buying plants to “landscape” the garden. The buying however, never stopped. I blame social media – I joined some plant groups on Facebook (notably Plants & Gardens Malaysia) where everyday, I would see these beautiful plants that other people have and I felt that I must have them too. I slowly descended into the rabbit hole of plant collection and that, I have to say, is an entirely different world.

It was no longer about selecting and buying plants for landscaping purposes. It was about lusting after a specific plant for its beauty but more often than not, very much influenced by its presence on social media. And, the strange phenomenon that the more ‘rare’ the plant is, it seems to rank higher on one’s wishlist – because supply was hard to come by, the hunt became a game and, almost like a game of conquest.
Prices of collector plants sky-rocketed in 2020 due to Covid-19, as many more picked up an interest in plants – so demand shot-up but supply remained at the same level and the competition for highly sought after plants intensified. For example, a cercestis mirabilis plant that I bought in 2019 cost RM30 but is now priced around RM500 to RM600. There was also a variegated philodendron billietiae plant I considered buying in 2019 at RM1,800 but I held back because I thought it was a ridiculous sum of money. However today, this plant is going for more than RM10,000. This is just to give you an idea of how much the prices of some plants shot up in the past 18 months.
Anyway, back to my garden! Pre-Covid- 19 days, I had to travel for work 40% of the time. When Covid descended on us, I suddenly had all this time at home and in 2020, two things happened. Firstly, I started a plant YouTube channel “Leafing Around” to share my gardening journey with a focus on garden design tips and plant care. Secondly, I spent 2020 dreaming up my garden and making this dream a reality. My YouTube channel which basically documents my thought process and the making of my own garden. I have no landscaping training and my knowledge was basically based on reading articles online with endless hours of scrolling through Pinterest! My mind went into overdrive and exploded with ideas – I was inspired by Balinese garden, the Catalan architect Antoni Gaudi’s whimsical building and his ‘Park Guell; in Barcelona, the Roman ruins and the patchy stone/brick walls in the little lanes, bringing me to my DIY garden. Enjoy!