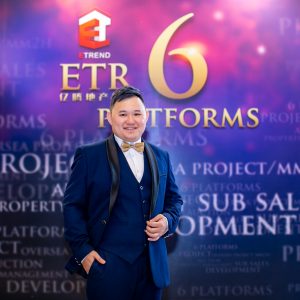 E Trend Realty Sdn Bhd dreams big and is optimistic that this year will be the start of an upturn and perhaps even a boom in the property market.

The worst is over for the Malaysian property market, declares Kenny Kok, Founder and CEO of E Trend Realty Sdn Bhd. “We are waiting for the bull market,” the down-to-earth property man adds.
Explaining his optimistic view, Kok said it’s because of the cyclical nature of the property market. Citing the example of past cyclical swings of the market, he said: “Since 2005, it was bad, then in 2009, the market started to look up, thus attracting many real estate agents. But in 2014, the market slumped again. Now, 6 years later in 2020, the unprofessional or uncommitted agents have been filtered out, leaving the good ones still in the market. How much worse can it get? I don’t think the market will be slow all the time. So yes, we are getting ready for a market upturn or even a bull market in 2020 or beyond.”
One sign that Kok might be right is when he pointed out that although the Klang Valley market may be slow, other areas such as Kota Kinabalu and Kuantan were seeing increased sales.
On where the demand will be coming from to fuel a potential boom, Kok said in the Klang Valley for example, there are many people coming from other states to work. “Hence, there is demand for rental from them. The rental market determines the property price. So, the increased demand for rental will cause the demand for property to rise as well.”
He further said for a RM500K property which can be found in abundance in the Klang Valley, an average monthly income of RM4K – RM5K is sufficient. “And if there is a shortfall from rentals to pay the instalments, the owner can always rent out one or two rooms.”
Also, the market is primed for an upturn because savvy investors buy when the market is on the way down or when it is at the bottom, which is what is happening now, Kok revealed.
Besides, the CEO noted that Malaysian property prices are lagging behind other countries so the upside potential is very strong.

If that’s not enough to motivate his 200-strong real estate agents, Kok liked to stress the fact that it’s very easy to reach five-figure incomes in real estate.
“I always mention to my agents, in property, RM500K is considered a very cheap product. If you can sell even 1 unit, you can get RM10K income already (based on 2% sales commission),” he shared.
The youthful-looking boss also emphasised on being ahead of trends, meaning the agents need to update themselves on the latest trends in the market and equip themselves with the relevant knowledge. “Be ahead of the market instead of behind ”; that’s also Kok’s personal motto.
Despite picking up a few awards along the way since its establishment 4 years ago such as the 2017 Rising Star Agency Award from Star Property and Asia Honest Entrepreneur Award as well as the Golden Phoenix Award, the dynamic firm is not resting on its laurels.

After setting up six branches across Malaysia, namely four in the Klang Valley, and one each in Johor and Sabah, the company is aiming to go into property development. In fact, its 61-unit terrace house development at Teluk Panglima Garang, near Banting, Klang is nearing completion.
Explaining their decision to venture into property development, Kok said it’s because the underlying demand for landed property in Malaysia is still very strong especially those priced below RM500K.
Their maiden Klang development has the distinction of being the first non-Malay project there and the surprising thing is 40% of their buyers comprise Indians, according to Kok.
Besides property development, which is a new venture, the company has traditionally worked on five major areas – subsale, property management, overseas market, project sales and auction. Their ultimate vision is to become the top integrated property company in Malaysia.

On how the firm deals with the issue of tough financing, Kok explained that E Trend Realty has the expertise to help its clients build their credit profile in order to get their loans approved. “We are specialists with strong connections with the banks and valuers. It is no secret that you can still get the effect of zero down payment if you know how to assign the right value to the property.”
“For me, a loan is easy to get, so to be able to close a deal, agents need to know the right mechanism on how to successfully help clients get their loans approved,” he smiled, adding that their successful loan approval rate is about 70-80%. This includes clients who do not have regular incomes such as freelancers and business people.