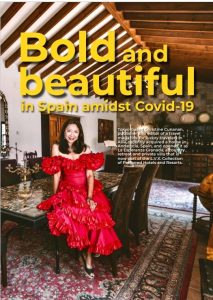 Bold and Beautiful in Spain amidst COVID-19

Courtyard before a flamenco performance

The idea to purchase a property in Spain came out of the blue, just as I was finishing my second glass of plum wine onboard a Japan Airlines flight about to land at Narita Airport in 20 minutes. This was at the height of the pandemic in June 2020, when the virus was ravaging much of Europe and there was no vaccine in sight. Many businesses were in despair, but those who have seen cycles and crises come and go understand that this painful moment for the world also offered buying opportunities for the brave and the foolhardy.
As soon as I reached my home in Tokyo, even before unpacking my bags, I went online, googled “properties for sale in Spain” and made a shortlist of the estates I fancied. I was looking for a fire sale, of course, and I wanted either a beautiful country house or a unique hotel. Luckily, I found a property in the pristine Lecrin Valley in Southern Spain, just 30 minutes from Granada and 90 minutes from Malaga, that easily met these two criteria.
[ihc-hide-content ihc_mb_type=”show” ihc_mb_who=”1,2,3,4,5,9″ ihc_mb_template=”1″]
The Lecrin Valley lies amidst some of the most protected lands in the country, with a strict plot-to-building ratio regulation. However, the former owners, an elderly British couple, somehow received permission to build what is now the largest structure in the entire area, on a hill amidst five hectares of organic land that boasts of what locals describe as the “most beautiful view of Lecrin.” They built a small hotel with a lovely main residence for themselves, but they never actually operated it as a hotel.
Once in a lifetime
Instinctively, I knew that I would never find a similar property elsewhere so price was immaterial especially as there was no basis for comparison. These days, months after the fact, local government officials tell me that it is impossible to ever build this same house again. So it was the right decision in hindsight as there really is no right price for a unique property except the amount that both buyer and seller find acceptable.
My next step then became something of a legend in the luxury hotel industry. Since borders were closed, I bought the property sight unseen and in the first months renovated most of it remotely via several thousand WhatsApp messages. Today, just one year later, we are a proud L.V.X. Collection member of Preferred Hotels and Resorts and considered one of the best hotels in Granada.

Of luck and madness
But let me backtrack to that fateful day in August 2020 when I purchased the property without even a surveyor’s report and then entrusted the transaction to a lawyer I had never met and the official turnover of the keys and the house to Pablo, a Spaniard I’d spoken three sentences to at a cocktail party in Manila a year before.
Pablo came from the region of Asturias, which is 882 kilometers away from Granada at the exact other end of Spain. He made the nine-hour drive on my behalf, which was incredibly lucky for me, as I knew no one else in Granada, or in the entire region of Andalucia for that matter. In purchasing this property on a whim, you see, I’d basically thrown a dart on the map of Spain and this was where Fate led me.
This is a crazy story especially with COVID-19 thrown in, but it is exactly what happened. In fact, a journalist from the National Geographic Traveler stayed with us recently and listened wide-eyed to my narrative. She then wrote a glowing review with the title: “A hotel born out of madness.”
The property itself has good bones, and the views and experience of nature here can never be understated. However, the process of transforming a country house starting to show its age into a luxury retreat worthy of belonging to one of the most prestigious hotel groups in the world amidst the pandemic required a succession of miracles. Fortunately, these were never in short supply.
It also needed a huge appetite for risk and the kind of positive mindset that’s practically set in stone – two things deeply embedded in my DNA. As my close friends will confirm, when I set out to do something, I have always jumped right in with gusto, eyes on the goal and with little thought for the downside. The word “impossible” does not exist in my vocabulary.
So one door after another simply opened with ease. My acquaintance Pablo coaxed his best friend Napo to also travel from Asturias to join him, and Napo has not left the property since Day 1. He is now the general manger of La Esperanza Granada.
Things I did for love
I myself have spent a total of six months on-site over three trips. During this time, I have undertaken everything possible to make my dream come true. I was often repainting tables, washing floors and sanding down furniture when workers were scarce. Other days, I was on my knees taking the weeds out of a garden grown wild or sweeping the courtyard. There was never a spare moment nor an unhappy one.

However, I most enjoyed decorating the hotel and filling it with art and antiques that reflect the deep culture of Granada and its Moorish connections. Interior design is my particular passion and I happily had eight bedrooms and two living rooms to redo and two courtyards to bring to life. Things are far from over too. Just before sitting down to write this, I finished soaping down some new tiles in an office that I am turning into a spa.
So when I wasn’t choosing tiles at Fajalauza, one of the most traditional artisan families of Granada with a 500- year history of making tiles, I was negotiating objets d’art with everyone from fine art galleries in Granada to gypsy dealers selling out of their homes along the coast.

Table with a tale
It was via one of Andalucia’s finest purveyors that I chanced upon a stone table top inlaid with semi-precious stones including black onyx, lapis lazuli and rose quartz. Specifically handmade for the home of a Middle Eastern prince near Marbella, the heavy slab broke in transport rendering it useless to the buyer.
This table was hidden away in an unlit corner at the back of a large warehouse, as if everyone wanted to forget about in the darkness in those first five seconds immediately spoke to me of marvelous artistry. It was also the perfect breakfast table, cracks and all.

“How much is that?” I asked the store owner. He mentioned a breathtaking sum as the original price, adding: “I tried to sell it as an outdoor floor to a lady with a villa near Malaga but even she didn’t want it. But if you are willing to buy it, broken and all, you can have it for 700 euros.”
The price was the easiest part of this equation. It took a giant truck, a forklift and eight big men to transport this table from Granada to my guest salon, where today it’s the centerpiece of a beautiful room as well as a great conversation starter with guests. Everyone can’t help but admire the details over their croissants and coffee.

It’s all about the details
When guests first enter this salon, which incidentally is also my favorite spot on winter mornings, they walk around in wonder, touching every piece and taking not a few photos for their social media accounts. I’ve only mentioned one table, you see, but actually every furniture and artwork at La Esperanza Granada catches the eye and offers an interesting story.
As for me, I’m thrilled to own a hotel full of lovely things that were unwanted by someone else and then found by us, in our treasure hunt across Andalucia between lockdowns. In more ways than one, we’ve given all these discarded things a new and wonderful life in a chosen country estate beloved by guests who thrive on art, aesthetics and culture.
Visitors from everywhere
Since opening in August 2021, we have received visitors from all over the world. We’ve had a family from the next town hire the entire property for a baptism celebration and guests from as far away as South America and Asia who’d heard our story and booked stays without knowing our exact location or deciding what they wished to do in this area. They’d chosen the hotel first and then planned their trip around it.

A gentleman from Chile rented our villa for eight days of safe solitude while a family from Singapore celebrated their six-year-old daughter’s birthday on the property. In the 15 weeks that we have formally been open, we’ve had six weddings and 80% occupancy on weekends – no small feat considering most of the world was still on some kind of legal or self-imposed isolation during this period.
Feedback from guests
More importantly, 98% of our visitors so far have given us perfect scores online and we have received the kind of wonderful tributes from guests that make me teary-eyed. One lady from Madrid actually sent us a poem about her weekend stay that ended with: “Thank you, La Esperanza Granada, for being in my life.”
Meanwhile, one of our six brides saw our Spanish Mission style façade and actually forfeited her deposit on another venue to book her wedding with us that same day. Conde Nast Traveler Spain recently described us as “the most romantic hotel in Granada” because the hacienda with the Sierra Nevada mountains behind it really is the perfect photo backdrop for couples. Her parents were understandably upset about the money lost but she was over the moon.
Afterwards she wrote us: “There is no more accurate name for this place than La Esperanza (hope). Because I was looking for hope in my life at exactly this time, and I found it in this place.” You’ll find this wonderful tribute, along with so many others, online. APR