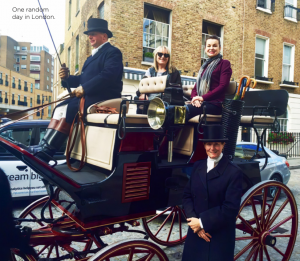 All The World’s A Travel Destination

“If you love what you do, you never have to work a day in your life.” While this profound saying rings true for only a select few – who else really lives out this truth more than Carol Grimes, a vetaran air stewardess with British Airways.
Having worked for one of the most prestigious airlines as a cabin crew member on the worldwide fleet, she has worked for over thirty years and yet never tiring of all the excitement and adventures afforded by her job, the ever enjoyed lady relishes exploring the many travel destinations her job has afforded her — from going to the usual tourist travel destinations to far flung countries.

“People from Rio are called Carioca, and I’ve had the distinct privilege to mingle with real Carioca dancers.
“Working for British Airways afforded me the luxury of not only travelling but also working on an aircraft for over 14 hours to help the customer enjoy a safe and pleasurable flight. I’ve met wonderful people from all over the world. The responsibility for everyone’s safety and security was paramount.
[rml_read_more]

“Meeting people that were world leaders who made decisions for the world’s future, to people visiting and travelling to universities and experiencing different cultures afforded me great humility. And, to be around my colleagues who were the most compassionate, competent and outgoing, objective, positive and assertive people to be around were all counted as joy to me,” she adds.

And, what a fascinating journey this has been for her with the golden opportunity opening up for her to travel all four corners of the globe.
She has relaxed in the Seyshelles, lived it up in New York City, toured Barbados, done the tango in Argentina, partied with the social queen of Rio Narcisa-Tamborindeguy at Costa Rica and even attended a U2 concert at Madison Square Gardens to booth.

Life has been magical to say the least, working with a fleet of like-minded crew members working together anywhere from 30 to 37 years. Sadly though, the crew just lost one of their colleagues recently Keith Mascot, one of the Pursers who lead the cabins with such attentiveness and elegance, passed away.

Still, the journey continues on and Carol is grateful she has the company of fellow comrade Andrew Keen who oversees the crew as Cabin Service Director and is responsible for up to 22 crew members on board a A380.
“One of our best mates include Mark Eden, another Cabin Service Director who attends to the customers with such ease and grace,” she muses.

“Only under the excellence of British Airways – responsible for the comfort and safety to our universal customers are all this made possible,” she adds.
“I have met the most interesting customers on board our aircraft,” she enthuses.

“I’ve been to from South America to the Middle East to the Far East, Australia, Pakistan, Africa and North America. I think again the main thing about travelling is to share the experience with the crew, because I feel when traveling as a team with British Airways we have had the most wonderful memories and for that I am truly grateful.”

Carol looks forward to travelling once again when the borders eventually open up. The cabin crew have the highest level of experience worldwide. Some are now available to crew private jet based out of London.
For more details, contact: Carolgrimes@hotmail.com
Instagram: carolgrimesnottinghill